Vancouver, BC, 12 January , 2021 – Newlox Gold Ventures Corp. (“Newlox” or the “Company”) (CSE: LUX | Frankfurt: NGO) is pleased to announce that its affiliate Newlox Research and Development Corp. has reported excellent results from Stage 1 testing of the new Organic Aqua Regia (OAR) gold leaching technology. Final analysis of results from Stage 1 testing indicates not only is a gold recovery of 94.68% achieved at ambient temperature, but also a 100% recovery is achieved at 80 degrees Celsius.

The Company is investigating the use of Organic Aqua Regia (OAR) technology as a non-toxic and water-free alternative to cyanidation to produce both gold and other precious metals.

Newlox R&D is developing OAR in conjunction with the University of British Columbia in Canada and Chiba University in Japan to leach gold with this reagent, that is both non-toxic and which is widely used in other industries. The main advantages include that it is non-toxic, is recyclable, extracts gold faster than cyanide, does not use water, and does not require carbon or electrowinning.

The Company undertook Stage 1 testing on a high-grade gold ore grading an average of 48.87 grams gold per tonne. The ore was ground in a BICO mill to reach a 80% of the material below a grain size of 0.12 mm (P80 -0.12mm) before leaching with OAR. Newlox’s research team utilized the Yates model in 16 experiments to investigate several combinations of reagent dosage and leaching time.

Newlox R&D Corp. undertook leaching tests in Vancouver, with the gold dissolution in the OAR calculated based on the gold grade in residues obtained after filtration. A third-party metallurgical laboratory (Global Mineral Resources) in Burnaby, BC, was used to verify the results using aqua regia digestion and Atomic Absorption Spectroscopy (AAS). 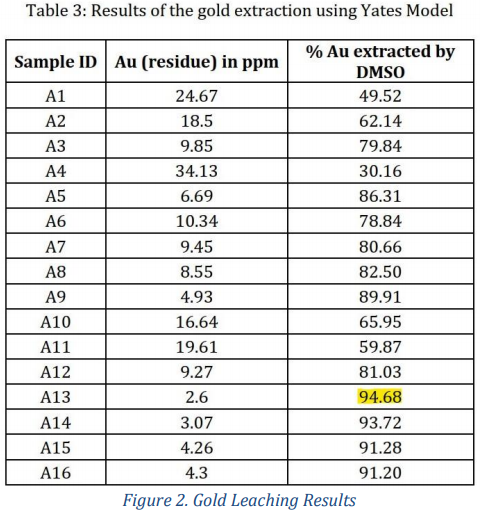 The R&D team used the Yates testing protocol to modify various factors during testing and evaluate their effects and relevant interactions. The Yates protocol identified the most significant factors in overall gold recovery. Most encouragingly was the feature that all samples returning over 90% recovery during Stage 1 testing had reagent dosage commonalities, indicating a clear route forward for Stage 2 testing.

Parallel testing was undertaken at the University of Chiba in Japan on the same ores tested by Newlox R&D in Vancouver. The Japan-based team experimented with alternative reagent additives and different leaching temperatures and found significant effects based on those factors.

Leaching tests undertaken in Japan at 80 degrees Celsius achieved 100% gold recovery in 4 hours, followed by precipitation of the dissolved gold by adjusting the solution’s pH. The pH control enabled pure gold recovery while concurrently suppressing the precipitation of other elements in the precipitate. This promising result indicates that gold may be recovered from the solution without the need for electrowinning.

Stage 2 testing is now underway to both reproduce the results seen in Stage 1 testing and further investigate the effect of reagent dosage, time, and temperature on leaching mechanics. Additionally, the R&D team is focused on testing both the recyclability of the OAR reagent, and methods for recovering gold from the solution.

“We are most encouraged to report that the first round of testing achieved up to 100% gold recovery, using the cutting-edge OAR leaching technology.

This initial round of testing forms part of the Newlox R&D 12-month OAR development program. We are gratified to realize such early positive results.

On Behalf of the Board, Newlox Gold Ventures Corp.

The information in this news release includes certain information and statements about management’s view of future events, expectations, plans and prospects that constitute forward- looking information. Forward-looking information includes, but is not limited to, the completion of the work programs currently underway and the results of these programs. These statements are based upon assumptions that are subject to significant risks and uncertainties. Because of these risks and uncertainties and as a result of a variety of factors, the actual results, achievements, or performance may vary materially from those anticipated and indicated by these forward-looking statements. The material risk factors that could cause actual results to differ include the risk that work undertaken by the Company may have unintended effects, the risk of delays in completing work, and the risk that the Company may not be able to raise sufficient funds and Force Majeure. Although the Company believes that the expectations reflected in the forward-looking information are reasonable, it can give no assurances that the expectations of any forward-looking information will prove to be correct. Except as required by law, the Company disclaims any intention and assumes no obligation to update or revise any forward- looking information to reflect actual results, whether as a result of new information, future events, changes in assumptions, changes in factors affecting such forward-looking statements or otherwise. Neither Canadian Securities Exchange nor its Regulation Services Provider (as that term is defined in the policies of the Canadian Securities Exchange) accept responsibility for the adequacy or accuracy of this release).

Technical Disclaimer: The Company advises it is not basing any decision to produce on a feasibility study of reserves demonstrating the economic and technical viability of the project and also advises there is increased uncertainty and specific economic and technical risks of failure associated with any production decision. Stewart A. Jackson, Ph.D., P.Geo., a “Qualified Person” within themeaning of National Instrument 43-101, has prepared, supervised the preparation of, and approved the contents of this News Release.